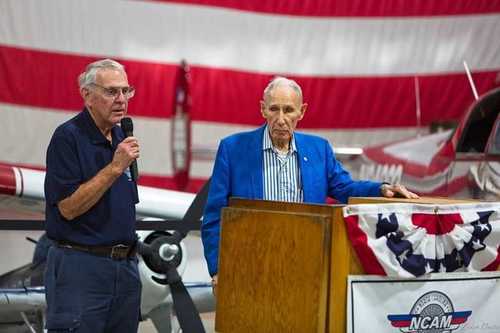 We are a volunteer supported non profit, dedicated to preserving aviation and military history for the generations to come. Located near the Asheboro Regional Airport, our hangers offer 20,000 square feet of military and civilian aircraft, wartime memorabilia, artwork, historically accurate aircraft models and more. Our exhibits are continually changing so please stop in and see what we have on display today!

Timeline of the NC Aviation Museum and Hall of Fame:

1994 - Spurred by an interest in flying and the collection of old military aircraft, the North Carolina Aviation Museum began as a dream of local Asheboro businessman Jim Peddycord. He created the "Foundation for Aircraft Conservation" in 1996 and held the first annual air show at the adjoining Asheboro Municipal Airport that same year.

1997 - On June 4, 1997, just a year after the first air show, tragedy struck as Jim Peddycord and his son Rick, both died in a mid-air collision practicing for the second annual air show.

1997-1998 - However, local businessman, pilot and vintage aircraft collector Craig Branson as well as several other FAC members refused to let Jim’s dream die!! They continued to restore vintage war aircraft for the enjoyment and education of the public. The museum was renamed "Peddycord Foundation for Aircraft Conservation" in his honor.

2001 - State of North Carolina officials designated the museum as the future site of the N.C. Aviation Hall of Fame.

2004 - The restoration of the B-25 is completed. It's first flight since arriving at the museum was held on Saturday, Oct. 30 at the NCAM's "Annual Member Appreciation Dinner."

2006 - Museum officials expand the NCAM's mission to include not only military aircraft, but historical, vintage and civilian planes and the aerospace world as well. The B-25 that had been on temporary, long-term loan to the NCAM rotated out of the museum’s inventory.

2019 - Improvements to the museum begin thanks to a grant from the State of North Carolina.